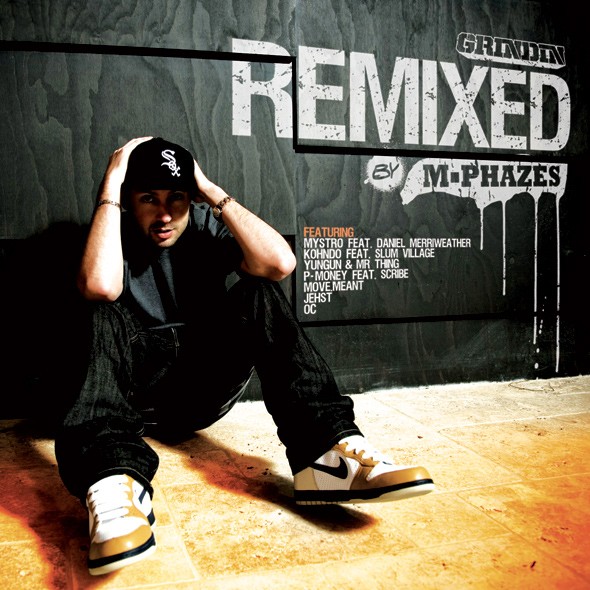 To celebrate the launch of the new Grindin’ website, for a limited time we are offering the Grindin’ Remixed by M-Phazes compilation album for free download! The album features exclusive remixes of tracks by Mystro Feat. Daniel Merriweather, Kohndo Feat. Slum Village, Yungun & Mr Thing, P-Money Feat. Scribe, Jehst, OC and many more! Also, check out our exclusive interview with M-Phazes after the jump, featuring questions by the artists he remixed for this release.

M-Phazes is the perfect example of a diamond in the rough. Born and raised in the Gold Coast of Australia and relatively isolated from Hip Hop culture, he has carved a place for himself among Australia’s Hip Hop elite and is putting Australia on the global Hip Hop map. His style is best described as a combination of Neo-Soul & Boom Bap with a modern twist. Drawing inspiration from producers like J Dilla, Battlecat, DJ Premier & Pete Rock, M-Phazes has forged an original sound that is uniquely his own. As soon as the beat drops, you know it’s another M-Phazes classic.

With over 9 years of production work under his belt and over 50 releases all over the world, M-Phazes has moved from strength to strength. Landing his first significant release on Supastition’s ‘Chain Letters’ in 2005, he has been unstoppable since. His discography reads like a who’s who of underground US Hip Hop with his beats being blessed by artists such as Pharoahe Monch, Masta Ace, CL Smooth, ED OG, Royce Da 5’ 9”, Elzhi, Sean Price and many more including R&B artist Amerie. In Australia he has worked with a host of Hip Hop artists culminating in the release of his debut album ‘Good Gracious’ which is out now through Obese Records featuring the likes of Bliss N Eso, Phrase, Muph & Plutonic, Delta, NFA, Pegz and Spit Syndicate.

In late 2008 Grindin’ approached M-Phazes to remix some of its catalogue which showcased his broad range of production skills with artists from the USA, Canada, UK, France, Australia and New Zealand. To coincide with the launch of the Grindin’ website and a free download of the Grindin’ Remixed album we got a number of artists who he chose to remix to ask a few questions and find out a bit more about the man behind the beats.

When you thought about remixing Times Up, did you already have those sounds in your head for the beat or did you search for sounds until you found something to match my vocals?
I actually got the sample from an old beat I made, I just thought it would work better over the sample so i threw it in there and chopped it a bit different. I also wanted to keep the authentic 90’s NY sound to it so the Impeach the president break worked perfectly, just something simple.

From my catalog what other songs would you remix and if any which ones would you think should not be remixed?
I wouldn’t touch Born to Live as rising to the top sample just fits it perfectly, Time’s up is timeless too i don’t know why the hell i remixed it, just the classic lines in there made me to it. I probably would have remixed Dangerous with Big L if I didn’t remix do Times Up, would love to hear that shit updated.

‘Scribe 2001’ is a New Zealand Hip-Hop classic. Were you aware of the significance of the song beforehand and how did you approach remixing that particular joint?
Yeah, that’s my favorite P-Money/Scribe joint, I wasn’t trying to take anything away from the remix, more trying to give it a different sound. I just wanted to see if I could give the track a different direction, I love the original though, I like challengers that’s why I chose that track, I also remixed “Times Up” by OC which is a classic as well, call me crazy?

Your international rep is growing exponentially, but you’ve been doing your thing in Oz for years. To what do you attribute this current interest in your production? What is it that attracts these offshore acts to you and your music?
I’m not sure, It could be the different sound that isn’t entirely influenced by what’s “hot” in the states at the moment, I just like making good music and I don’t really follow trends musically.

Who would you name as, not necessarily your favourite producers, but the one’s who’ve most influenced your sound?
Dilla, he had the biggest influence on me, before him I was influenced by Pete Rock, Premo, Diamond and I’m still influenced by those guys, but Dilla, as for many producers, just came out and changed the way I look at production

Shameless self-promotion question: How do feel about our forthcoming collaboration album?
It’s slowly coming together and I’m very excited! the tracks we have so far are crazy and I can’t wait to finish it, though I don’t wanna rush it!

Name one tune (any genre) you wish you produced?
The Verve – Bittersweet Symphony, I always thought that’s some shit I would do, with the strings and the big drums, such a tune!

What’s the longest amount of time you prefer to spend making/completing a beat?
I can spend 1 – 2 weeks on a track, though I prefer getting a track done within a week, that’s usually getting live instruments though, if theres no live musicians on it, it will usually take around 1-3 days. I don’t have a preference though I’m happy as long as the track is sounding how I envisioned it

You did a great job on the remix of ‘Help Dem Lord’, why did you choose to approach the remix in the style you did and what were you trying to capture with the vibe?
I wanted some big gospel/soul sound to it as the title suggests it’s almost a gospelish song already. I wanted to make it epic.

What inspired you as a producer when you started out?
Early Public Enemy, De la soul, NWA and RUN DMC were the groups who cemented my love for beats and production. I loved the rhymes but the beats caught my attention the most, especially the Bomb Squad who produced PE’s stuff, all the crazy samples and sounds grabbed me from the jump.

If you could pick an artist to produce for, who would be your dream collaboration?
Probably Lauryn Hill, or maybe a production album with James Poyser, would be cool to do something with him he is a genius!

What is the difference for you between making a beat for a remix and making a beat for a new track? Which do you prefer?
I prefer creating from scratch, with a remix you have it in your head that there is the original out there and the remix will always be compared, which is cool, but I prefer making new tracks and trying to make something that has its own identity and is different.

Which non hip-hop producers inspire you? Do you have plans to branch out into other genres yourself?
James Poyser is a big inspiration, Quincy Jones, David Axelrod, they are all legends and open up my ears to other sounds and types of music, i am already branching out into indie music, producing a girl called Kimbra who doesn’t have a difinitive style, its a big mash up of genres and I love it!

Who is your favorite artist musically that you’ve worked with?
Probably Pharoahe Monch, he has so much passion about his music and the tracks he chose from me, that rubbed off on me and I was going mental in the studio trying to make iller shit for him to rock! Can’t wait for his new album to drop.

Excluding money, if you had to choose between doing a whole album with one artist per year and getting 10 different placements per year which would it be?
I would probably do the 1 album with 1 artist, I love touring and dj’ing for an artist and that would get me out of the house a bit! Plus I can sink my teeth into a project more than I can with 1 beat to 1 artist.

IX Lives from Now On

What is your favorite piece of equipment you own?
I don’t own a whole lot of gear, probably my talk box though, I’m not that great at it but it’s fun!

Who was your favorite artist when you were 13 years old?
Shit I don’t really remember, could have been PE or De La Soul. I was so into hip-hop back then I would listen to anything so I probably had 8 favorites

What do you think sets you apart from other producers?
I think every producer is different, there are some that can replicate someone else very well, which sucks.  But for me, I think it’s just the urge to incorporate a bunch of different styles and mesh them to what I do, whether that be dance orientated music, or electro, soul, jazz, weird glitch shit, whatever.  But I just try and make good music and original music.

What record or artist do you dig that most people would expect you to hate?
I’m a big 90’s R&B fan, so I get into Hi Five, Riff, ABC and shit like that, not sure if that would be unexpected but its kinda weird to some people

How old were you when you made your first beat?
I think i was around 12 or 13, all midi from a roland keyboard and sequenced with an Alesis midi sequencer, recorded to a Tascam 8 channel tape recorder.

How have your inspirations for creating music differed from that point in time?
Definitely, money plays a big role as this is my job now, not to say I water down my stuff for money but I’m not quick to work with someone “for the love” any more, fuck what anyone thinks about that too!

If you were to produce an album with one mc right now who would it be?
Lauryn Hill probably, she is talented as fuck, sing, rap, I would love to make an album as dope as Miseducation of…

What are your thoughts on Grime music?
It took me a while to warm to it, my mate Fraksha would play a heap of it whenever I was at his place and I slowly started getting into it, now I really like it. Frisco, Tempz and Ghetts are probably my favorite Grime Mc’s, would love to work with them one day!

What made you decide to shop your beats overseas and not just keep it local?
I was living in a place that had no real hip hop scene, so I use to use the net to get my stuff out there and post of American forums, that’s how it first started then it sort of spread to more and more artists.

Working with a lot of overseas artists, do you think NZ and OZ rappers are on the right track or have their own flavour?
Definitely, NZ generally has a much more Americanized sound, whereas Aussies tend to be pretty patriotic with the accent and the type of hip-hop. I love both styles, NZ has some really talented groups like Home Brew Crew, Smashproof, Scribe.

How much time do you spend making music?
Not as much as I used to as I’m touring a lot now, but pretty much 90% of my week is about music, weather its meetings with publishing, sessions with artists, djing, whatever, theres not much happening that isn’t about music.