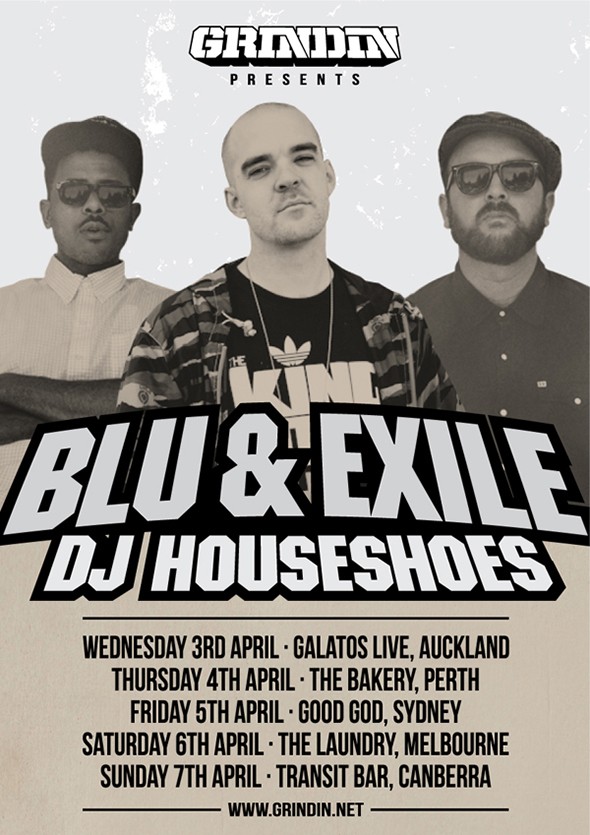 Contemporary West Coast Hip Hop artist Blu is riding on the edge of superstardom, having signed to Warner Brothers amongst notoriety as Los Angeles most prolific underground star. His solo albums, mixtapes and instrumental compilations redistribute the west-coast sound in a soulful yet entirely modern way. Exile’s production credits read like a guide to quality hip hop in the 21st century: Aloe Blacc, Mobb Deep, Ghostface Killah, Snoop Dogg, Big Sean and many more have the producers work amongst their linears. Together, the duo have released 2 stunning LP’s – ‘Below the Heavens’ and 2012’s ‘Give Me My Flowers Whilst I Can Still Smell Them’ both receiving critical acclaim and a step up for the west coast sound.

DJ and Producer House Shoes is best known as Detroit’s Hip-Hop ambassador to the world, helming the infamous St. Andrews Hall night from 1994-2004. Keeping a watchful eye over the modern Hip-Hop movement, House Shoes was integral in breaking many future-superstars whilst bringing forward the long-lasting Motown resurgence.

Through his House Shoes Recordings label, he pressed the classic Jay Dee – Unreleased EP, as well as Phat Kat’s ‘Dedication to the Suckers’ and his own LP ‘Loungin’. Shoes has since DJ’d and produced around the world both solo and alongside acts including Phat Kat, Slum Village, J Dilla and Percee P.