April77 is an experienced, full-service creative studio located in Sydney’s Inner West offering design solutions over an extensive range of disciplines including: branding/logo design, print communications, web design and environmental graphics. Led by Ben and Nerrida Funnell of diverse attitude, style and background, they are collectively able to supply creative solutions from Hip Hop to fine art, corporate to contemporary with equal certainty and passion.

Now in their 10th year of business they have decided to release the book “A Decade Of Album Covers” which covers the work they have done for the Australian Hip Hop community. With the book being released later this month Grindin’ caught up with Ben Funnell to discuss all things April77.

What are your earliest memories of music?
My earliest memories would be the records played in my house growing up. My dad used to play old Western movie soundtracks like High Noon. Mum would play Stevie Wonder and Roberta Flack amongst other things – but these were the records I liked. I also used to play the story records like Batman and 20,000 Leagues Under The Sea – these had dope soundtracks as well. I still have them on vinyl. I remember obsessing over my uncle’s Kiss records at a very young age too – that had more to do with the cover art than the music though.

What got you into graphic design and who were your influences?
Coming out of high school I was really into fine art and fairly resistant to using computers so I went to get my Associate Diploma of Fine Art at Penrith Tafe. My painting teacher was an incredible artist from the Blue Mountains named Stephen Crisdale. He also taught the design class at Tafe and introduced me to Photoshop and the ability to ‘undo’ your mistakes. That’s what lead me down the path to becoming a graphic designer. Influences on the work I do these days would include Reid Miles, Eric Haze, Cey Adams, George Dubose, Chuck D, Jeff Jank, Brent Rollins, Donda, Drawing Board Design, Guy Featherstone, Burn Crew, Mexi and the list goes on… 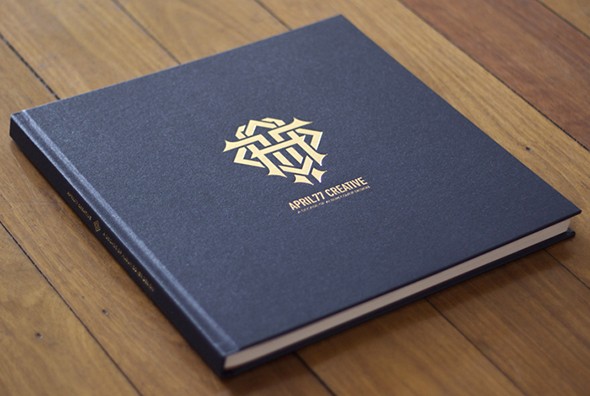 How did April77 Creative first start?
The April77 team comprises of my wife Nerrida, designer Sasha and myself. Nerrida and I were both born in April 1977 so that’s how the name came about. We met while working at the same design studio in Canberra and by way of a stint working in Toronto, Canada we moved to Sydney and started April77 as a full-time studio. For the first couple of years it was basically just me working on album covers and websites but eventually we got so busy with other work Nerrida had to come on board as well.

What was your first big break in working with the local Hip Hop community and was it hard coming from Canberra and getting your foot in the door?
My first job in Australian Hip Hop was doing layout and design for Stealth Magazine. I met with Mark Pollard and presented my portfolio (which at the time consisted of some corporate design work, some stuff from Uni and some self directed work). He liked the work and we connected straight away over our appreciation for Hip Hop. From there I ended up working on Hyjak N Torcha’s album ‘Drastik Measures’ and word just spread from there.

When did you realise A77 could be a full-time job?
I’d say it took about 6 months of steady work, one job flowing into the next for me to realise this wasn’t going to stop so I decided to keep at it and see how far I could take it. 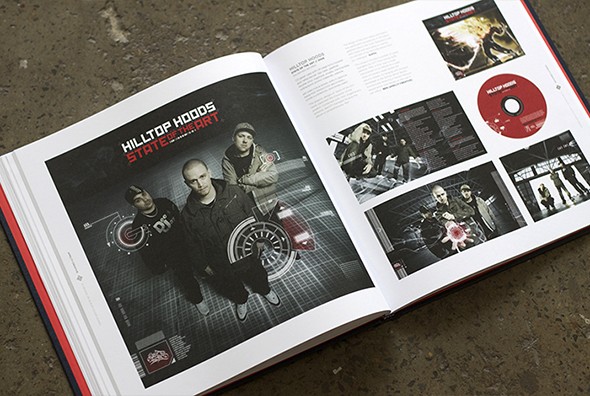 You have worked with a number of artists from early in their careers until now where they are established names. What is key to maintaining these relationships?
I think coming from a corporate design studio and having that experience working in a professional environment first played a huge role in how we run our own business. Regardless of the size of the project or the budget we treat every client and every project with the utmost professionalism. People want to feel confident that you’ll meet their deadline and create inspired work so you’ve got to deliver on that promise to maintain long term relationships with clients.

What are your thoughts on how the local Hip Hop scene has evolved compared to when you first started? What one thing does Australian Hip Hop need right now?
Obviously the popularity has escalated which is great. There’s a lot of diversity in the scene with a lot of unique artists representing different cultures and perspectives within Australia, and a variety of styles as well which is very important. I know everyone says this but when I first got into Hip Hop in the late 80s through to the early 90s every artist in the states had their own unique style and it was really looked down upon to bite another artist. This is even worse in the US these days where lots of people blatantly bite Kendrick or whoever is hot now, but I think that happens a fair bit in Australia now too which is a shame. Phrasing or singing hooks like another artist who’s popular on the radio is wack to me. Singing on hooks is fine but I like it when an artist puts their own spin on it and keeps pushing the art. As far a lyricism in the scene, and production – its probably never been better than right now. The talent level is incredible and some serious heat has dropped this year. One of the best parts of the job is hearing a lot of this dope music before its released to the public. 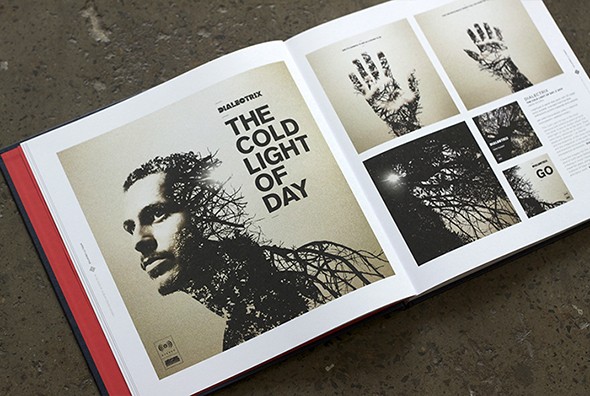 What is the typical process you go through when creating artwork for an artists project? What inspires you to create?
It really varies from project to project. Some artists come with a strong idea in mind from the outset, and sometimes we work with them on the concept and talk through a direction together. Other times its a completely open brief and we just go away and start working up concepts ourselves. In all cases it always works best when we get to hear the music first. The aim is always to make the artwork ‘look’ like the music ‘sounds’. That’s the biggest inspiration – the music never stops in the studio unless I’m quoting or invoicing, or calling mum.

“A Decade Of Album Cover Design” is the new book you are about to release. Apart from it being the 10th anniversary what are the reasons behind putting it out now? What are you hoping to achieve with the book?
I’m into collecting and cataloguing things (records, magazines, comics) so this was a way to collect and catalogue a huge amount of the design work we’ve done over the past decade. Sometimes you get so busy with client work that you never stop and reflect on what you’ve accomplished so its a bit to do with that as well.

The other big motivator to do this book was to present the artwork at its originally intended 12″ vinyl size, because so often these days album artwork is relegated to the thumbnail on an iPhone which really devalues its importance. I think real fans still want a great product, with artwork and lyrics and liner notes – but when you can go get the music for free online you’ve got to really sweeten the deal to entice them to buy the physical product.

Its also interesting I think to see the progression of styles from the earlier work to now, both from a design perspective and how our skills have hopefully evolved for the better over time, but also the image of the artists featured has evolved and become more open to break Hip Hop cliches etc – which is cool from a design perspective as it gives you more scope. The challenge for us and what I think we bring to the table is how to break the code or cliches but still keep the design rooted in and with a respect for Hip Hop and what’s come before. 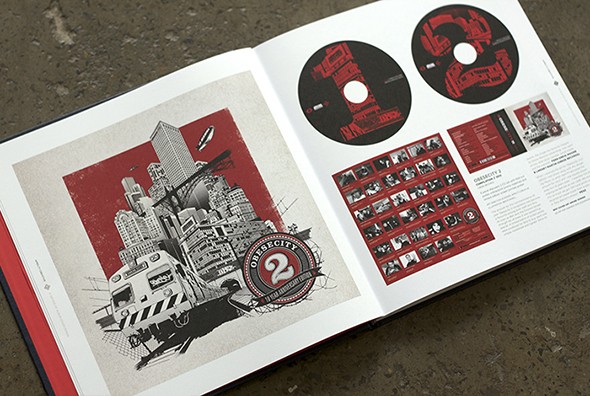 What one artist project have you most liked working on?
Its hard to pick one favourite, but one fairly recent job that I think turned out great is the Obesecity 2 – 10 year anniversary edition artwork. We won the Ozhiphop.com Award for best cover design for this job which is great to be recognised in that way. When Pegz came to me with the brief I knew I had to try and match Mexi’s dope design for Volume 1 which has always been a favourite of mine, so I definitely spent extra time on this to try and make it special. We did a limited run screen printed poster for this project too which is something i’d never done before and I really enjoyed that process. Shout to Shannon at Aisle 6 who helped make that a reality.

How much work would you say is music based for April77 Creative and what other work do you generally do?
At present we’d do about 50% music work and 50% other projects, from cafe and restaurant branding through to corporate brochures and annual reports. The work is really varied which is great – I still handle most of the music related work but every now and then its great to just typeset an annual report and zone out with some Ahmad Jamal on in the background.

What music/artists are you currently listening to?
2013 has been a great year for Hip Hop – in rotation now are the new joints by Tornts, Joey Badda$$, Marco Polo, Dopplegangaz, Plutonic Lab & Dialectrix, Flu, Ka, Roc Marciano, Black Milk, L’Orange & Stik Figa, a lot of 90s classics stay in rotation in our office too, and we also play a lot of jazz, new and old like Glasper, Jose James, Freddie Hubbard and heaps more…

What are the future plans for April77 Creative?
We have baby number 2 dropping May 2014 so that’s exciting. Other than that just keep pushing our design further, hopefully continue to improve and try new techniques and styles.

What one album cover did you wish you had designed?
A Tribe Called Quest – Low End Theory. Its in my top 5 rap albums of all time – but the cover is just classic. The concept, the execution. Plus at the time this dropped it was so different and broke from all the cliches in such a dope and original way. Definitely on the jazz tip – like it could have been an old CTI records cover. I just love everything about this record.

What’s your definition of Grindin’?
Blue collar mentality. You gotta get yours and work hard for it cause anything given isn’t appreciated in the same way. Hilltops and Bliss N Eso are probably the hardest working artists we’ve worked with and their success speaks for itself. The challenge is balancing the grind with having a life outside work – but passion for what you do is the best motivator to get shit done.

Where can people pick up the book and keep up to date with everything April77 Creative?
Check out the promo video and more info on the book at www.april77.com. Pre-orders for the book are up on the store page at http://a77.bigcartel.com. If you order before 25 November you’ll receive the book before xmas so its a great gift idea for yourself or someone else. There’s also some packages available which include vinyl and other cool stuff.